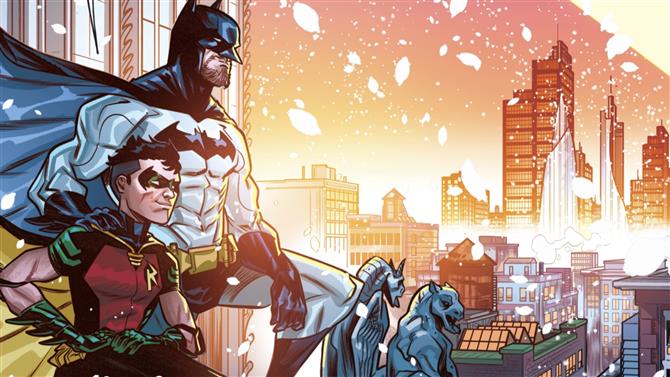 Tim Drake, the third Robin, has been on a journey of personal discovery in the pages of the Batman: Urban Legends anthology title, where his regular feature from writer Meghan Fitzpatrick, artists Alberto Albuquerque Jimenez and Nick Filardi, and letterer Pat Brosseau has depicted Tim entering a same-sex romantic relationship with his friend Bernard, and embracing his long-unspoken queerness.

And in the latest chapter from December 14’s Batman: Urban Legends #10, Tim takes another key step forward in understanding his own identity.

Spoilers ahead for Batman: Urban Legends #10 ‘A Carol of Bats’

With Bruce Wayne sullen and sulking in the Batcave following the events of ‘Fear State’ which led to Batman’s indefinite exit from Gotham City (in the events of Batman #118 , set after the events of this story), Tim seeks a way to bring Bruce back to his usual confident, unflinching superhero self.

Through it all, Tim worries that even though he’s found happiness in his relationship with Bernard, he’s «waiting for the other shoe to drop» — a feeling many closeted queer people experience when we begin to understand our sexuality, but before we are open with our loved ones about who we are.

Conflicted with emotion, Tim has a heart-to-heart with his figurative ‘older brother’ Dick Grayson, who tells Tim that Bruce can never be truly happy or satisfied and that it’s up to Tim to find his own path to happiness away from Bruce’s legacy as Batman, much like he did when he became Nightwing.

Tim takes Dick’s message to heart, taking Bruce to a church that runs a shelter and soup kitchen, where he and Bruce, as Batman and Robin, engage with those affected by the events of ‘Fear State,’ with Batman even embracing and apologizing to some of the Gotham citizens for his failures.

Afterward, full of Christmas spirit and a renewed commitment to trying to improve the simplest aspects of the lives of the people of Gotham City, Bruce and Tim sit atop a building overlooking the Gotham skyline. 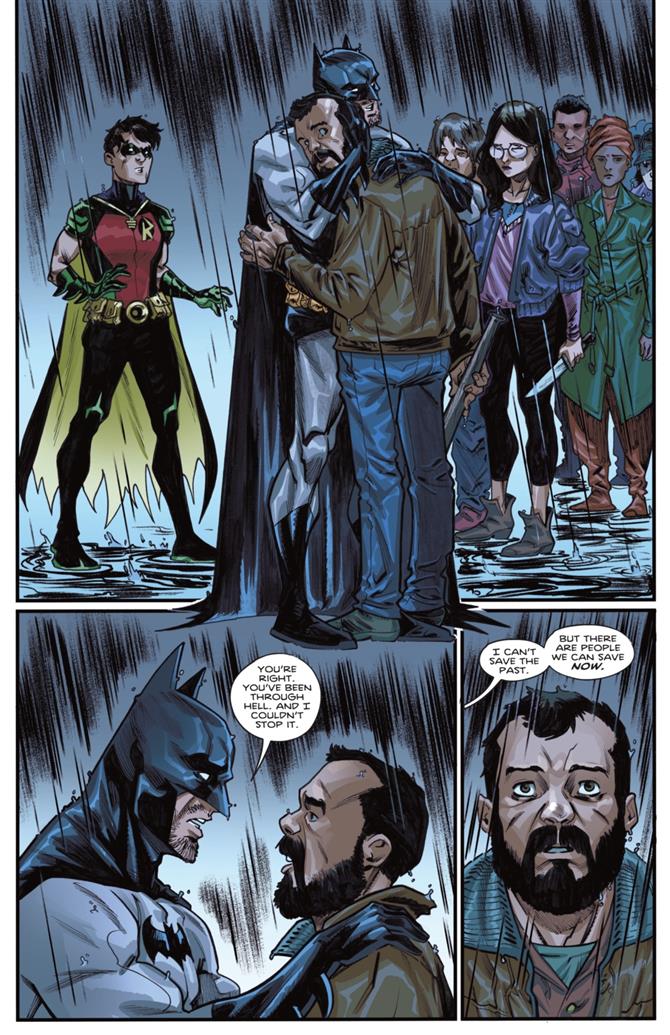 Though we only see Bruce’s half of the presumed conversation about Dick’s sexuality, with Bruce stating he remembers Bernard, and asking about Tim’s previous relationship with Stephanie Brown/Spoiler, it’s clear Tim has fully broken the news to Batman, as Bruce acknowledges Tim’s coming out as queer and his openness about his relationship with Bernard with one simple word: «Good.»

And from there, Tim offers Batman a gift of a special first aid kit to help him repair his injuries when no other Bat-family heroes are present (a callback to an earlier scene in the story where Bruce attempts to stitch up his own wound).

Bruce accepts the gift, and after a beat, tells Tim «You don’t have to try to make me happy. I am happy because you’re my son.»

And with that, Batman offers up the perfect response to Robin’s coming out: simple acceptance and love. He makes it clear in his acceptance of Tim’s gift and his expression of paternal love that he sees Tim as the same hero and person he was before Tim’s coming out, and that their relationship will continue to thrive with Tim’s out truth in the open.

For many queer people, myself included, the process of coming out can be both daunting and ongoing. Even with a level of internal understanding of our sexuality, and a stable base of support from our loved ones, the reaction people have to their friends and family coming out can be unpredictable at best. 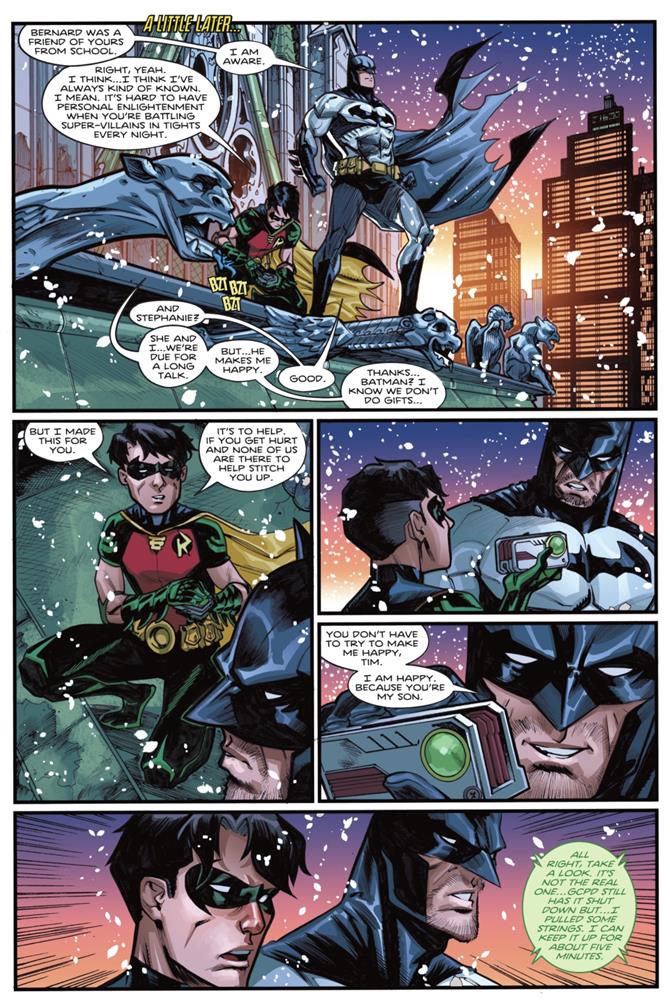 And for many people, perhaps Tim included, who has yet to put a label on his sexuality, coming out can happen multiple times throughout our lives, with the same fears and unpredictable expectations each time.

In Batman’s reaction of simple love and compassion, writer Meghan Fitzpatrick offers a clear blueprint for those whose loved ones trust them with coming out to them. For many queer people, the idea reaction from those we care about and trust with our sexuality is plain acceptance and the assurance that they still love us the same way they did before we came out.

The story of Tim Drake’s understanding and acceptance of his queerness is just beginning, and so far, it’s off to a heartwarming, affirming start for fans who have seen themselves reflected in Tim for years.

Where does Tim Drake rank among the best Robins of all time? See for yourself! 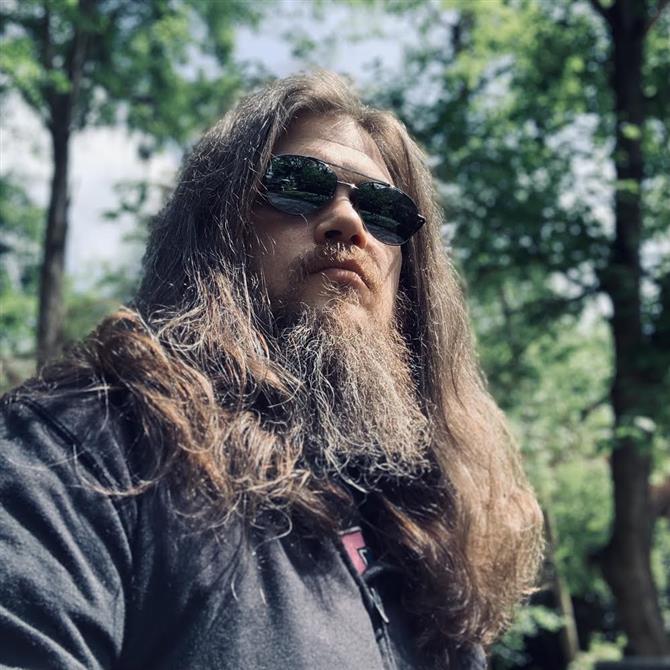 I’ve been Newsarama’s resident Marvel Comics expert and general comic book historian since 2011. I’ve also been the on-site reporter at most major comic conventions such as Comic-Con International: San Diego, New York Comic Con, and C2E2. Outside of comic journalism, I am the artist of many weird pictures, and the guitarist of many heavy riffs. (They/Them)